Today I will be doing a fashion post on the Hunger Games nail polish line and also some of the wardrobe in the new movie. I haven’t actually seen the movie yet, but I am extremely excited and will be taking a trip to the cinema very soon and I have just started the first book. Okay, let’s just start with the fact that Katniss is the *best* big sister ever. She is a strong feminist with really cool hair styles… The other day I finally figured out how to do the Katniss french plait up-do, it’s actually a dutch braid (reversed plait) and It’s really simple! I will insert a picture of her hair somewhere in this post! 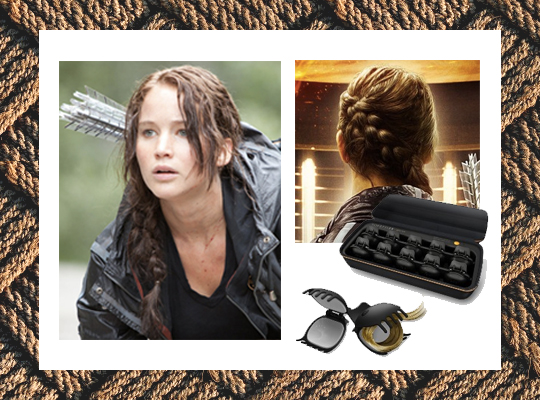 The people of this fictional land could give the Gaga’s, and Katy’s and Nicki Minaj a run for their money, as far as eccentric costumes were concerned. On second thoughts they would probably feel completely at home among them, or maybe not as they wouldn’t stand out. *awkward*

One person who stood out in the movie, in terms of styling is Elizabeth Banks (Effie Trinket). She actually looks like a character out of one of Tim Burton’s movie. Think Johnny Depp in Alice in Wonderland meets Charlie and the Chocolate Factory (but in a gown). Quite stylish and she carries it really well! Katniss and the people from her district are the only ones who dressed like normal people. Actress Jennifer Lawrence, who plays Katniss Everdeen in the movie, sports different looks in the film, but her rusty and adventurous look has got maximum thumbs-up. Influenced by the military look, her style is  utilitarian and practical.
NAILS:

Agro. An almost frosty green-gold, you need to watch out for brush strokes a little bit, but if you’re careful in application, it looks fine.
Smoke and Ashes. The glass flecks in China Glaze Glittering Garland, but with a really dark green/black base, and you’ve got Smoke and Ashes. I can tell I’m going to get heaps on wear out of this as we head into the winter months. I neeeed this.
Electrify. A mix of medium red and gold glitter. Despite people complaining about the opacity of this, it is actually quite opaque.
Luxe and Lush. Luxe and Lush is a flakie style top coat, except it’s more like iridescent shards than the traditional ‘flakies’ that we’ve been seeing recently.
Dress Me Up. A gorgeous dusty pink mauve, this colour just makes me thinks of the character Prim, Katniss’ sister. It is a really fresh take on a traditional pink.
Fast Track. A neutral creamy beige with a gold shimmer. Very pretty and subtle
Foie Gras. A Purple-y brown. Not much to say about this one…
Harvest Moon. A shimmery bronze, leaning more to brown than gold, but with a bit of a gold tint to it.
Hook and Line. This one is a little frosty also, similar to Agro, and you might find similar brush stroke issues. Colour wise, I personally think this is quite unusual. It’s not a grey, but not quite a silver, and it’s not a foil or a metallic. It kind of reminds me of mist or fog.
Mahogany Magic. A rich creamy brown, I can’t help but think of milk chocolate when I see this.
Riveting. The star of the show, in my opinion. Riveting is a glorious shimmery orange, with prominent gold pigment in it. Surprisingly opaque.
Stone Cold. After seeing other swatches, I knew that this would dry matte, but it just looks so cool! And all the silvery specks are highlighted further with the top coat.
I knew I would love this collection just because I love The Hunger Games, but some of these polishes are quickly becoming favourites! My picks would be Dress Me Up, Electrify, Fast Track, Riveting, Smoke and Ashes,  Agro, and Stone Cold.
The weaker shades in my view are: Mahogany Magic and Foie Gras.
I absolutely loved Effie Trinkets nail design during the reaping, so I decided to have a go myself. The first attempt was a disaster. I used the bathroom sponge to get the gradient which just left massive blobs on my nails…meh.
The second attempt was much better. I used a wet cotton bud (Q-tip) To dab on the gold polish in several coats. Here is the end product. I was asked about my nails five times I shops when I was paying for stuff today!